After 102 years artists are back in the garden studio 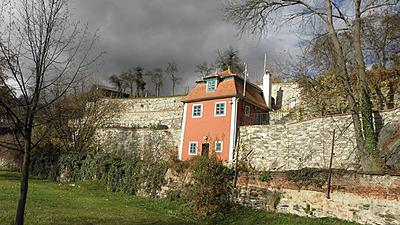 The Egon Schiele Art Centrum and the Český Krumlov Development Fund have arranged for the new use of the garden house on the Vltava River, where Egon Schiele lived and worked for a few months in 1911. The owner of this very romantic house that is “stuck“ in the rock is the ČKDF, which was able to obtain the means for the very precise renovation from European funds. The ESAC has leased the renovated house and has placed it at the disposal of selected artists: it was not by chance that one of the first artists to be approached was Roman Týc, who was convicted and imprisoned for one month in 2012 for an artistic endeavour, whereby he “livened up“ the figures on the traffic lights at pedestrian crossings (it happened exactly 100 years after Schiele was imprisoned in Neulengbach because he put up his erotic drawings and nudes in the studio and children going by could see them through the window). The others, who have already had the opportunity to spend a month in the house, were artists from the Czech Republic and Austria, but also an artist from Japan who, in addition to his work wrote and sent his “residential diary“ to the Japanese Press for Japanese admirers of Český Krumlov and Egon Schiele.

Artists have a furnished one-room apartment and a small attic studio at their disposal in the garden house. The apartment is equipped with replicas of Schiele’s furniture (the originals can be seen in the Schiele Centrum) including a one hundred and eighty centimetre bed; however for those artists who would find this “too small“, there is a folding sofa bed. The fundamental reason that this house is so interesting for artists is, however, its mysterious romantic atmosphere. The extensive stepped terraces around the house, the full-grown trees and the river increase the feeling of the workings of the natural elements - sun, wind, rain and snow which is a great experience in this house, as is the awareness that the premises were occupied and loved by one of the best artists of the 20th century. The fact that he was happy and wanted to settle here permanently cannot fail to have an influence on the artwork of the house residents.